See: PoP_Reward_Summary for general guidelines on how PoP rewards work. This article is more technical about getting rewards with the PoP Miner.

Here's a good process for anyone who wants to PoP Mine:

If after that, still no reward --> please send log files

This is a high-level overview of how PoP rewards work. This page answers "if you do X, you have a good chance of getting greater-than-zero reward." It does not try to predict exactly what the reward would be, or the exact BTC needed for that reward (as this is due to constantly changing market forces and issues with the BTC difficulty adjustment algorithm that appear roughly once a month). The exact mechanics are not linear, and there is some luck involved (particularly during abnormal conditions on the BTC network, which happen occasionally).

First, read HowTo_run_PoP_Miner to see the basic operations of the PoP Miner.

There are several variables involved in a successful mine and reward payout:

Make sure to set your ncpop.properties file (these are example numbers, actual numbers will vary), and restart the PoP miner after saving your changes:

What should the BTC Tx fee be?

There is not an exact answer. Some game theory and risk is involved, and as other Bitcoin transactions increase their per-kb fee, the per-kb fee you will need to pay to compete for inclusion in the earliest block will increase accordingly. Also note that a high BTC fee does not guarantee inclusion in the next BTC block; random factors like a BTC miner's refresh time, network latency, etc. can also play a small role.

There is a spectrum of fees:

Check what the recent BTC fees are on a blockchain explorer. Take for example the following PoP transaction on tBTC (testnet BTC): https://www.blocktrail.com/tBTC/tx/8dbba547dd15907c5eb4757bfa061c7a62b900a020557fde60b19b6e2967cf7d. The Fee / KB is 0.00498592. The miner who sent this PoP transaction had the setting 'bitcoin.fee.perkb= 498592' in their ncpop.properties file. Consider increasing or decreasing that value given your risk threshold and your observations of other PoP transactions on the network and their corresponding per-kb fees.

How can I see my reward?

In the PoP Miner, run the command viewrecentrewards

Also run listoperations to view the current running operations and their status.

I mined PoP, but saw no reward

PoP is rewarded 500 blocks after the endorsed block. At an average of 30 seconds per block, this is about 4.5 hours. So first understand that rewards won't come for ~4.5 hours after your mine operation.

My transaction is on BTC blockchain, but I got no reward

Even if the PoP Transaction is on BTC, it may be in the "danger zone" where it took too long to be rewarded.

If the "Time until confirmed" is > 20 minutes, there is risk of not getting rewarded.

The way to increase chance of reward is to increase BTC transaction fee such that it is in an earlier block.

The status shows "Done", but I did not see a reward yet

"Done" is a good sign, it means it made it through the mining life cycle.

Similar to PoW mining, "Done" means there is nothing left for the Miner to do.

A reward could be coming, or it is possible due to other reasons listed, that the mining operation finished without reward.

I still do not see a reward

If everything else is covered, then this should be a rare situation.

Do not run multiple instances of the same executable

Do not mine too frequently

If the same log shows two mining operations kicked off at the exact same time - something is probably wrong - try running a single instance with one 'mine' command.

Is my PoP Transaction on the BTC network?

If you PoP mine, you should relatively quickly (within minutes) see an output like so:

And you should be able to see that on any BTC block explorer (this example uses BTC testnet), such as:

Who is winning PoP?

This is publicly available from the Explorer.

Looking at the "PoP payouts for this block protecting other blocks" section, one can see the addresses and block for which rewards were paid out: 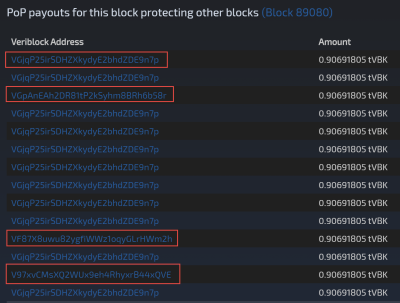 If you are not receiving PoP rewards and have already set your fees at market-competitive rates as explained above, look for common errors.

Troubleshooting steps: Try increasing your PoP miner's configured fee (see Overview for an example of how to do so) and/or decreasing the frequency at which you PoP mine (generally not recommended more frequently than once every 3 minutes per PoP miner instance)

Waiting for 10 peers required for broadcast, we have 7 ...

Explanation: The BitcoinJ library is having difficulty connecting to enough available peers to confirm that your PoP transactions are properly propagating across the network

Troubleshooting steps: Try lowering the aggression of any firewall between the PoP miner and the internet, check the BitcoinJ logs for any indication of repeated connection failures to peers, and try restarting the PoP miner.

Explanation: BitcoinJ is having difficulty in getting all of the requisite context block headers to allow the VeriBlock blockchain to validate the PoP transaction in question. This is usually the result of the difficulty bomb in BTC being exploited (which resets the mining difficulty to 1 and results in several orders of magnitude more BTC blocks per unit time than expected).

Troubleshooting steps: Check a popular BTC block explorer like [1] and look at the block times. If blocks are coming in at a rate faster than roughly once every minute, then the extreme block time is likely the culprit (and you may need to wait a day for it to adjust if several subsequent PoP mining operations also fail). If blocks are coming in at a normal pace, then try closing the PoP miner, deleting the bitcoin-pop-testnet.spvchain file, restarting the PoP miner, and attempting to mine again.