Proof-of-Proof ("PoP") is a consensus protocol which allows any blockchain to protect itself against double-spends by inheriting the full Proof-of-Work security of Bitcoin in an entirely Decentralized, Trustless, Transparent, and Permissionless ("DTTP") manner.

Proof-of-Proof functions by introducing a new form of mining wherein PoP miners compete to publish state data from a security-inheriting blockchain to a highly-secure blockchain (like Bitcoin) in exchange for a reward. The fork resolution protocol of the blockchain will consult these publications in the event that a reorganization is attempted by an attacker. Once a block on a PoP-secured altchain reaches Bitcoin-finality, an attacker would have to reorganize the Bitcoin blockchain in order to double-spend transactions in that altchain block.

The VeriBlock blockchain implements PoP to secure itself to Bitcoin, and allows other blockchains to inherit Bitcoin-level security in the most secure, cost-effective, and simple manner.

Technical documentation for Proof-of-Proof and the VeriBlock blockchain can be found on the project Wiki: https://wiki.veriblock.org/ and in the latest version of the whitepaper ("Proof-of-Proof and VeriBlock Blockchain Protocol Consensus Algorithm and Economic Incentivization Specifications"): http://bit.ly/vbk-wp-pop (May 13, 2019)

VBK is the symbol for the native utility token/coin of the VeriBlock blockchain. PoP miners on altchains using VeriBlock for security will spend VBK tokens/coins to perform security transactions which publish altchain states to VeriBlock.

No. PoP is a complementary consensus algorithm that reinforces any existing blockchain consensus protocol including PoW, PoS, DPoS, or PoC.

How do PoW and PoP Work Together?

PoP miners compete to publish fingerprints of the security-inheriting blockchain in the next block on the security-providing (i.e. Bitcoin) blockchain.

What is the VBK Token/Coin Lifecycle? 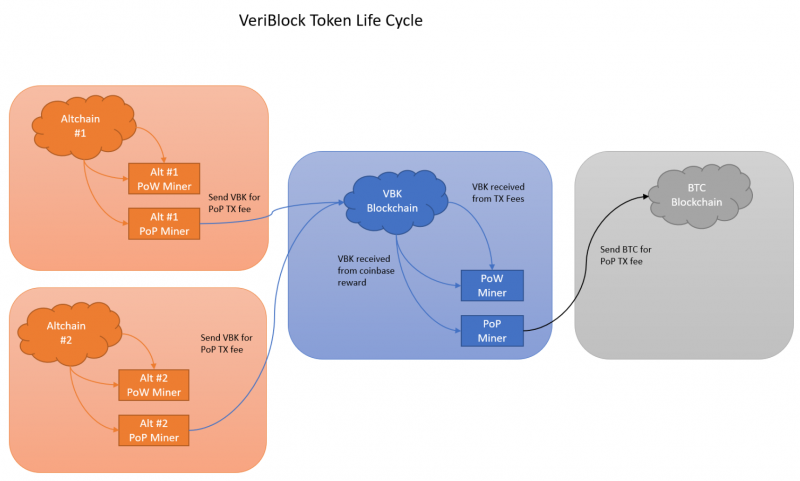 This is very different from several existing categories of solutions, such as:

VBK is not a Sidechain

While VBK does interact with other altchains (by providing them Bitcoin-level security), VBK is not a sidechain technology.

A sidechain allows assets to be transferred between blockchains (such as moving your Bitcoin off of the Bitcoin to Rootstock, and back).

VBK does not transfer assets to other altchains.

VeriBlock Proof-of-Proof is a complementary technology which could be used to secure sidechains from 51% attacks.

VBK is not a Drivechain

Drivechain is a specific Bitcoin sidechain implementation based on a soft-fork to the Bitcoin blockchain. VeriBlock is not a sidechain, but VeriBlock Proof-of-Proof could be used to protect sidechains including drivechain against 51% attacks, assuming the sidechain has a security budget (either through having its own native token/coin it can payout, and/or by having a vibrant fee market capable of funding PoP mining).

VBK is not Merged Mining

"Merged mining is the process of allowing two different blockchains based on the same algorithm to be mined simultaneously."

VBK transactions are standard Bitcoin transactions with special data in the OP_RETURN code (or embedded in an alternate encoding format). They pay standard BTC transaction fees, and are thus included in BTC blocks by default.

VBK is not merge mining:

Does VeriBlock Protect Against Attacks, or Only Detect?

VeriBlock prevents double-spend attacks. In a double-spend attack, an attacker sends tokens/coins to an exchange/merchant, the exchange accepts the deposit/the merchant delivers the goods, and then the attacker reorganizes the blockchain and removes that transaction from the network, stealing the funds.

With VeriBlock and the Bitcoin Finality Indicator ("BFI"), the exchange/merchant wouldn't accept and finalize the transaction until BFI indicated that the transaction has achieved "Bitcoin finality" which is a mathematical guarantee that the transaction cannot be overwritten/removed from the blockchain unless the attacker 51% attacks Bitcoin itself.

In the event that an attacker is producing an alternate chain, they have to publicly publish fingerprints of their attacking chain in-step with the normal block mining of the legitimate network, which will delay Bitcoin finality until the attacker stops expending resources. In the absence of an attack (or when the attacker abandons their attack and stops building the alternate chain), BFI can indicate that the transaction is as secure to accept on Bitcoin itself.

Is VeriBlock Vulnerable to a Censorship or Bribery Attack?

In order for an attacker to censor PoP endorsements on Bitcoin, they would need to bribe (or control) at least 51% of the entire Bitcoin mining power.

Given the enormous hashing power and decentralization of Bitcoin, it is assumed this is not feasible.

As VeriBlock receives adoption from altchains, a portion of those altchains' security budgets flow through the VeriBlock network and increase the bidding power of the VeriBlock blockchain for receiving PoP publications to Bitcoin.

In other words, VeriBlock combines together portions of the security budgets of all altchains which use it (along with its own native coinbase reward) to bid for space in the Bitcoin blockchain.

How does PoP Work with Consensus Protocols Other than Proof-of-Work?

How Does Proof-of-Stake (PoS) Benefit from VBK?

VeriBlock can benefit PoS networks in three ways: preventing double-spend attacks on the chain by a majority stakeholder, providing strong subjectivity in the long term (eliminating the possibility of buying up old private keys and making a long alternate chain from a distant point in history), and providing anti-censorship for normal transactions, slashing transactions, and validator set entry transactions even when 51% of the staking/minting power is controlled by a single adversary.