The BTCSQ package can be compiled directly from github, but for convenience the binaries are listed here:

How to get started

How to PoW Mine

How to PoP Mine

BTCSQ introduces PoP mining for Bitcoin based altchains, so PoP mining is a great place to start. It doesn't require expensive hardware.

Anyone can PoP mine: 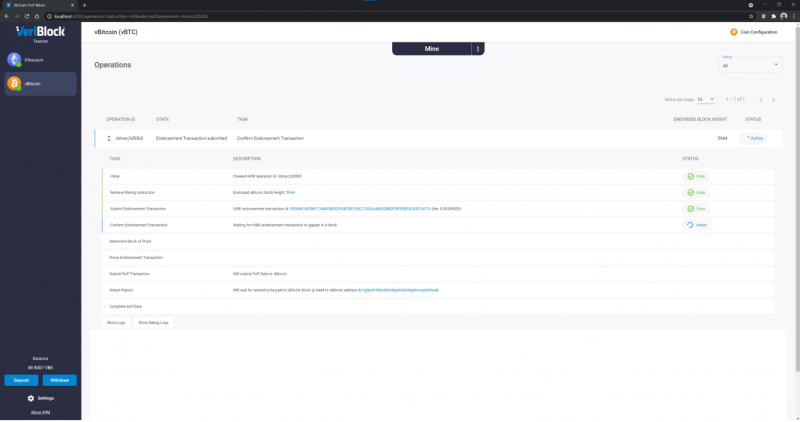 For any blockchain which launch based on the BTCSQ codebase and pops up to VeriBlock (which then pops to Bitcoin) - there is the standard MIT license. Very Easy.

For any new blockchains which launch based on the BTCSQ codebase, and for some reason do not pop up to VeriBlock, the license will require 10% of their total emissions to holders of BTCSQ at the time they launch.

BTCSQ had an incentivized testnet: Join_BTCSQ_Testnet, which ended on Dec 7, 2021.

A new TestNet may eventually be spun up.

What are the blockchain economics?

As vBTC is a reference of BTC... the economics are very similar to BTC:

What is the PoP Payout interval?

What are the PoP Rounds and Keystone?

Note that VBK NodeCore has 20 round indices (with 4 rounds) due to 30-second block times. See: HowTo_run_PoP_Miner#VeriBlock_.22Rounds.22

BTCSQ greatly helps VeriBlock, as it is the reference implementation (formerly codename vBTC) that all future altchains can copy. Before other altchains would be ready for mainnet, most efficient to have BTCSQ first be mainnet-ready.

Work out the bugs first in one reference, "pave the way", and make it easier for all others.

Much of the framework is shared:

Being directly forked from Bitcoin, BTCSQ has all the features of BTC, plus the fully Decentralized, Trustless, Transparent, and Permissionless ("DTTP") inheritance of Bitcoin's PoW security using VeriBlock's PoP consensus protocol, which introduces a new form of lightweight mining. This contributes to making Bitcoin more green by amortizing Bitcoin's hashing power over orders of magnitude more transactions than it processes natively. BTCSQ is also cheaper cryptographic notary than BTC due to lower transaction fees while maintaining the same immutability guarantees.

As more blockchains adopt VeriBlock for security, they continually contribute to fortifying and improving the entire ecosystem of VeriBlock-secured blockchains.

Blockchains forked from BTCSQ which do not use the VeriBlock security network must give 10% of their total emissions to BTCSQ holders.

What is the benefit to owning MainNet BTCSQ?

BTCSQ will be launched as its own independent MainNet altchain.

New altchains will be incentivized to fork from BTCSQ instead of BTC because BTCSQ provides all the Bitcoin functionality, and additionally:

A new altchain (forked from BTCSQ) could potentially have lower confirmation times for exchanges due to the 51% protection and vBFI integration with exchanges.

Most projects that fork from a parent project inevitably provide more testing and feedback that can flow back up to the parent project. Therefore BTCSQ is posed to benefit from testing and development of all child forks.

BTCSQ is the flagship reference implementation that is actively supported by a development team.

How can I get more involved?

There is a very active Discord channel.

Anyone can actively mine:

The code is open-sourced, and code contributions are always welcome:

Active development can be seen on github issues: https://github.com/orgs/VeriBlock/projects/1/views/5

Does BTCSQ Contain a Premine?

The public incentivized testnet phase ran from September 13th to December 7th, 2021, during which approximately 439,923 BTCSQ were mined.